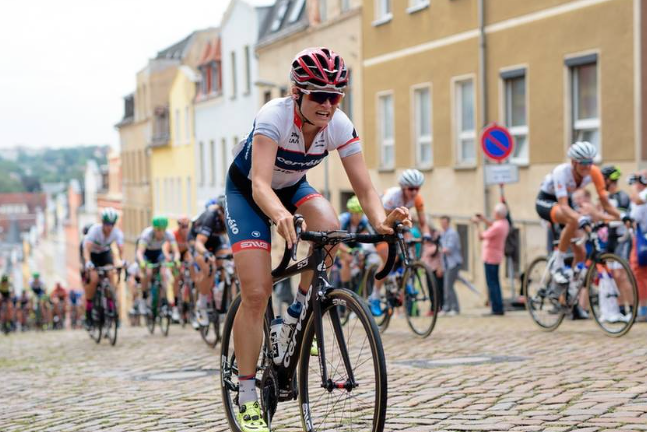 The opening stage of Internationale Thüringen Rundfahrt der Frauen saw an active Cervélo Bigla Pro Cycling Team. The race ended in a bunch sprint with Joëlle Numainville and Lotta Lepistö in the thick of the action. Numainville placed 4th on the stage followed by Lepistö in seventh.

The stage was won by Marianne Vos (Rabo-Liv) ahead of Lisa Brennauer (Canyon-SRAM) and Coryn Rivera (Unitedhealthcare). Lepistö won both intermediate sprints, gaining valuable time which means she’s third on the overall classification and has the sprinters jersey.

“The girls really tried to help me in the final and they did a great job in the intermediate sprints,” Lepistö said. “The whole race was nervous and hectic and there was already a crash in the neutral zone. I’m a little bit disappointed that I didn’t get the leaders jersey because I was so close to it because of the bonus sprints but I’m happy the way the team is working well together. It’s nice to have the Canadians back to racing in the team.”

The race continues on Saturday with stage 2. The race will cover a distance of 103 kilometres.